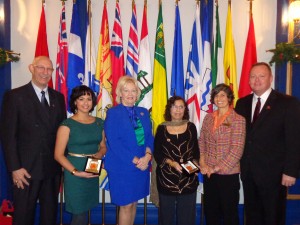 On Saturday, November 16, 2013 Her Honour the Honourable Vaughn Solomon Schofield, S.O.M., S.V.M., Lieutenant Governor of Saskatchewan joined the Multicultural Council of Saskatchewan to recognize all those who have made significant contributions to the multicultural community. The event took place in the elegant setting of Government House in Regina and kicked-off Saskatchewan Multicultural Week. The event consisted of a ceremony complete with a slideshow, speeches and awards, followed by a reception featuring cultural treats. About 70 people braved the inclement weather to attend the event.
Lieutenant Governor Vaughn Schofield, Parks, Culture and Sport Minister Kevin Doherty,  Saskatchewan Human Rights Commission Community Engagement Consultant, Heather Monus, and MCoS Board President Bruno Kossmann also spoke at the event. All spoke about how multiculturalism enriches Saskatchewan’s economy and social fabric pointing out that often diversity provides creativity and innovation, while connecting us to the world. They all took time to recognize the recent typhoon disaster in the Philippines and its impact on members of the Saskatchewan Filipino community. Finally, it was recognized that all the award nominees are leaders in the community and should be commended for their efforts. 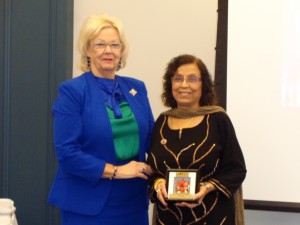 2013 Betty Szuchewycz Award winner: Renu Kapoor.
Renu Kapoor has been contributing to community life in since her arrival in Regina over 45 years ago. She has been an active member of the Indian community and has been positively influencing not only the India Canada Association (ICA) but the entire community. She has become a positive role model for many through her active involvement in multicultural events in the province.  She has demonstrated an awareness of succession planning as she has recognized and nurtured young leaders.  Due to her tireless efforts, India Canada Supper Night has become a signature annual event that celebrates the culture and cuisine of India and at the same time makes valuable contributions to local charities of Regina. Renu has demonstrated a strong commitment and involvement in the multicultural communities at the provincial and national levels as a volunteer with SaskCulture (MIF committee and now a board member), Regina Public Library, United Way of Regina, Osteoporosis of Canada (Regina Chapter), and the EMCY diversity awards.
The Multicultural Council of Saskatchewan and the Saskatchewan Human Rights Commission presented the first Multicultural Youth Leadership Award to an individual who is 29 years of age and under and has made significant contributions to multiculturalism. 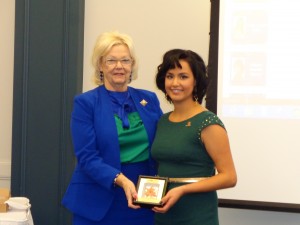 The 2013 Multicultural Youth Leadership Award winner: Julianne Beaudin-Herney.
Julianne Beaudin-Herney has been a young leader and advocate for aboriginal non-aboriginal relationships in both academic institutions and in arts. She is working with Sakewewak to revitalize and re-establish a visual presence and bring youth into the organization. Julianne is an activist for positive change and relationship building.  As a 20-year-old student, Julianne lead a petition, because she saw a brighter future for all the communities if Indigenous history was mandatory to take for University of Regina undergraduates.  Julianne envisions a place where both newcomers and long-time non-native families have a chance to see the history and understand the land and people that belong to Saskatchewan.  Her efforts through her art, her involvement with Sakewewak and her activism express her goals and work to make them reality.

We have created a photo album on the MCoS Facebook page. This account is open to the public and you do not need a Facebook account to view and save the photos.
To view and save photos, click here: MCoS Multicultural Honours Photo Album

Aaron Carapella has spent countless thousands of hours pouring through books, investigating in library archive buildings, making phone calls and travelling to remote reservations in the spirit of creating the most thorough map of Native America in existence. He has since gone on to make maps of the Indigenous Peoples of the entire Western Hemisphere, as well as many custom maps.