“Racism is a public health crisis,” according to a May 2020 statement from the National Alliance on Mental Illness (NAMI). This means that racism — whether unintentional, unconsciously, or concealed — has affected Black Americans’ access to equal and “culturally competent” health care.

For example, it has been widely reported that COVID-19 has disproportionately affected Black Americans. According to the COVID Racial Data Tracker, the death rate for Black Americans nationwide is 2.5 times higher than the rate for white Americans: 67 per 100,000 vs. 26 per 100,000.

Employees of the U.S. Centers for Disease Control and Prevention (CDC) sent a letter to their director alleging “widespread acts of racism and discrimination within CDC that are, in fact, undermining the agency’s core mission” that may have indirectly contributed to that disparity.

Just as some medical facilities have been overwhelmed by COVID-19 cases, increased anxiety, depression, and post-traumatic stress disorder (PTSD) — in people who are worried they might catch the virus or have been impacted by the lockdown and social isolation needed to control the pandemic — may, in turn, overwhelm the mental health system.

Racism is also a stressor for mental health problems.

In the U.S. surgeon general’s groundbreaking 2016 report Facing Addiction in America: The Surgeon General’s Report on Alcohol, Drugs, and Health, it states that Black Americans “are over-represented in populations that are particularly at risk for mental illness.”

Why? NAMI, “the nation’s largest grassroots mental health organization,” says it’s because Black people in the United States have been affected by racism and racial trauma “repeatedly throughout history.”

That is, racism and racial trauma did not end with the abolition of slavery in 1865, the passing of the Civil Rights Act of 1964, or the election of the first Black U.S. president in 2008. The protests in 2020 are a sharp reminder of that.

Mental illnesses such as depression and substance abuse can have a biological component, but they also can be caused or made more likely by external factors. Some are more likely to be experienced by Black individuals, including:

Some other factors are peculiar to the Black Americans’ history, such as:

Among Black Americans with any mental illness, 22.4% or 1.1 million had a serious mental illness (SMI), according to the 2018 National Survey on Drug Use and Health (NSDUH): African Americans.

According to the the U.S. Department of Health and Human Services Office of Minority Health (HHSOMH), Black Americans are 20% more likely to experience serious mental illness (SMI) than the general population.

But other sources claim the rate of SMI is the same or even less for Black people. This seems odd, since poverty influences some SMIs, and Black Americans are more likely to experience poverty.

These results might be skewed, however, due to “culturally oblivious measurements.” There may be a communication barrier even among fellow English speakers from different cultures. 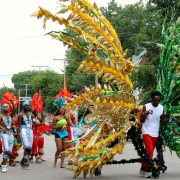 The Saskatchewan African-Canadian Heritage Museum (SACHM) has been one of the provincial leaders in promoting the importance of the historical and current contributions of people of African descent in the province. After years of reflecting and studying, this year they have chosen to change the title of the month to African-Canadian Black History Month. This is meant to align with the 1978 UNESCO Declaration on Race and Racial Prejudice, which clarified that genetics do not support human racial classifications; however, race as a social, political and economic construct remains a reality that results in persisting racial discrimination, violation of human rights and social injustices. The new title is meant to be inclusive of all people of African descent. MCoS applauds the efforts of the many organizations and individuals who work on cultural continuity, who share their cultures at celebrations of diversity, who expose the cost of racism and how we can go beyond it, who reach out to build intercultural connections within and beyond the African-Canadian community, and who contribute to social cohesion in all communities in Saskatchewan in so many ways.